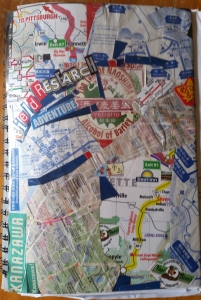 This trusty book was my precious companion for my amazing, month long overseas adventure last year- I have filled it with sketches, reflections, ticket stubs, maps, gallery fliers and of course, photographs – I think it has become one of my most treasured possessions.

After spending considerable time researching artists, galleries and sites I put together an application to undertake Field Research as a part of my Practice Led PhD Research at the Australian National Uni. Luckily for me that application was successful and on August 23rd last year I jumped on a big jet plane headed for America. I spent 8 days in the U.S. before heading to Japan for three weeks. For a chicka from country Australia who never expected to go overseas (does a 36hr round trip to NZ count as overseas?) this was a pretty precious experience.

I have meant to write a post about this field research since I returned home last September- there was so much to talk about that the task has just seemed way too daunting…. so I figure that instead of trying to capture my trip in words, I will give you the abridged version via a story in pictures…

My first point of interest was Fallingwater in Pennsylvania. Designed by Frank Lloyd Wrright & constructed in the 1930s, this iconic home is built atop a waterfall in a woodland reserve. It was commissioned by the Kauffman family as a replacement for their humble wooden bungalow which had been their weekend retreat from the industrial city of Pittsburgh where they ran a very successful business. This house embodies my concept of aesthetic subjectivity- it has been designed to wrap around the needs, and the better self, of each of the occupants (Mr & Mrs Kauffman and their adult son).

I was completely rattled from my travels- I spent the first night after a long journey in a dodgy as motel, I was commanding a hire car on the wrong side of the road & had to venture into the world of Walmart before getting to Fallingwater- I stayed nearby (at a much safer motel) and spent two days at Fallingwater, and took three guided tours of the home. It restored me, it was magic – an utterly indulgent, idealised building – but magic nonetheless, go there, you’ll love it… 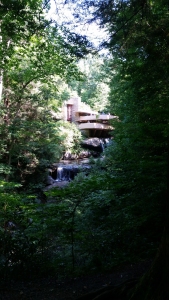 The Mattress Factory in Pittsburgh, Pennsylvania.

I came here primarily to see Chiharu Shiota’s installation Trace of Memory. It was meant to be a site specific installation in an old “Mexican War” House, a three story terrace just down from the Mattress Factory itself. I am not sure exactly how site specific it was but it was definitely a good example of the things that Shiota does well. It was a rather compelling space to spend time in, especially in the third floor where the summer heat filled the air and created the overbearing sense of memories presence.

I also got to see work by Yayoi Kusama

And early works for James Turrell which gave me a really useful context for later parts of my field research which sought him out with more focus.

In fact the very next part of journey was to New York City to meet with Guggenheim curator Nat Trotman who worked on James Turrell’s 2013 retrospective at the Guggenheim, including the creation of the new work Aten Reign- created specifically for the Guggenheim’s atrium. Nat was so generous with his time, speaking with him really deepened my appreciation of Turrell’s processes. I wish I had’ve been able to see Aten Reign, the photographs of it look compelling- I met a woman at Fallingwater who had seen it for herself, I asked her what it was like, she replied with such a smile “Light, Oh! It was All Light”

check out this link too… http://www.guggenheim.org/video/james-turrell

I spent three nights in New York and I feel in love just a little bit… My first night was in Harlem and my other two nights were a little lower, West 72nd St, just near Central Park and a short walk from the Hudson River. While I loved the bustle of the city it felt as thought it pushed me out of itself, into green spaces – such as the park & the river. After spending time in the dense summer forest at Fallingwater and contemplating the pull of the natural world in the work of both Frank Lloyd Wright and James Turrell I felt kindred with their sense of connection to the natural systems that exist over and above our urban worlds.

I visited the Guggenheim purely to experience Wright’s architecture- it really helped me to develop some of my field questions around how and why we construct different spaces, and how human life can be enhance through spaces that service and enable particular needs and activists. 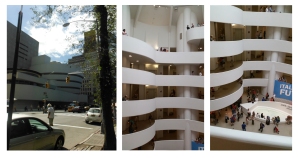 And a site that I found quite profound to visit was the 911 Memorial. I visited twice. The first time I did not take any photographs. I walked around, I watched, I observed people, I observed my own responses to the site. I was taken by the size of the pits which are now deep granite memorial pools with water endlessly disappearing down into the earth.

I thought they would be smaller somehow, they were massive, imposing. Standing beside these massive slippery, deep black holes I had the strongest sense of my own need for caution. Watching small children reach up and attempt to climb the name imprint edge I felt an embodied urgency to scoop them away in case they toppled over and fell into the pit.

Compared to the skyscrapers around it, it is clear that this site is about absence. An absence that is surreal when set within the relentless noise of new construction just nearby and the colour and movement of the thousands of visitors to the site. 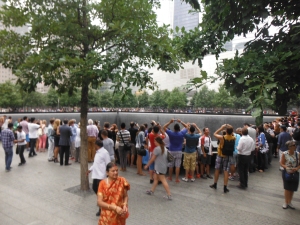 You can’t help but notice the spectacle of the site. We have become so accustomed to relating to novel, significant and compelling moments through our cameras. We photograph the present in order to preserve it, to process our feelings towards it whilst in some way deferring these same feelings for some later contemplation.

Every now and then I would notice people who clearly were not mere tourists to the site. A husband and wife stopped at the edge of one, he tenderly touched a name that was cast into the steel rim. He looked reverent and solemn. She motioned to take his photograph. 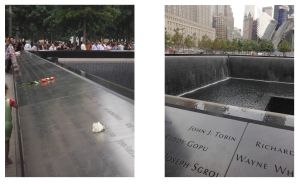