In late 2016 I was commissioned by Mercy Place Aged Care Warrnambool to create a mural for their high care ward. The brief was to address two spaces within the ward. The first was the entrance hall which looked primarily like a hospital corridor. It was white and sterile. The second space was a twelve meter long wall within the dining room. Staff and management had expressed a desire to create a more warm and welcoming space within this wing of the facility which cared especially for those with dementia.

The design I created for the entrance hall sought to replicate a living room. I created a wall paper pattern and stencil to bring some domesticity to the hospice space. A fire place was painted at toward the end of the hall to draw attention away from the ward’s main doors. A plant stand was painted on the main doors in an effort to disguise the door handles.

The design for the dining room was a lot of fun. I needed to work around a number of fixtures such as the kitchen service roller door and a metal radiator. These provide the seeds for ideas- the roller door became a centre piece in the “Great Ocean Road Diner” food cart, and the radiator became part of a steel fence around a beach shack.  The scene that I created was comprised of a number a smaller scenes inspired by the Warrnambool and district landscape. This was done quite deliberately to reference settings familiar to the wards residents. 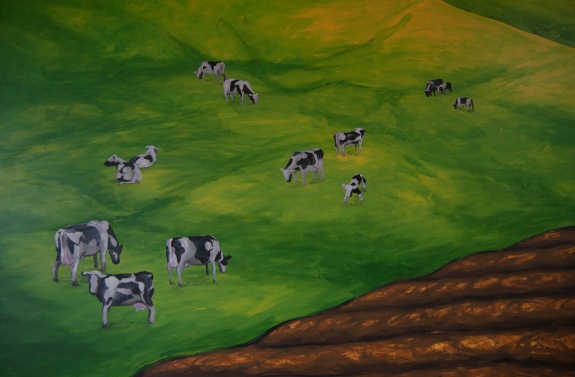 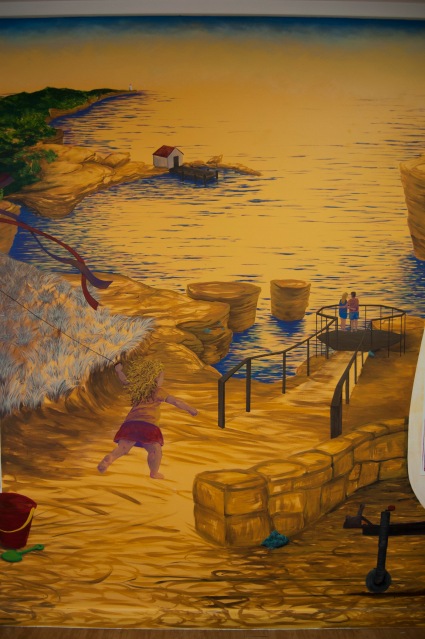 I began work on the project in August and completed it in November. Locale painter and decorator Rik Fox got the walls primed with coloured base coats – soothing green in the entrance hall, warm ocher in the dining room. Rik was a gem to work with. It was a massive undertaking but a pleasure at the same time- I became an artists in residence of sorts and found myself performing the role of painter as much as I actually painted. 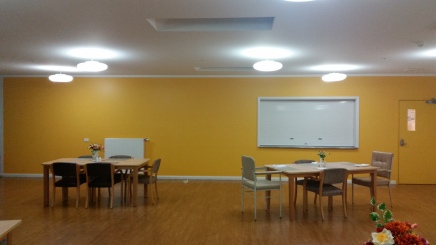 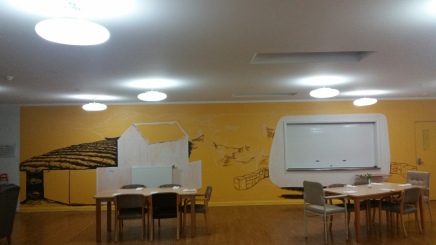 I met some wonderful staff, residents, and volunteers during my time working on the mural. I was often given suggestions for things to add as I painted, and often I took these up- the chickens are among these.

I had joyful conversations with residents for whom the painting stirred their own recollections  of farm life, childhood, or whatever. There were so many characters. I am happy to report that the vast amount of people for whom that ward was now home were content, if not happy- and I watched how the artwork I created added to that. It was a lovely place to be a fly on the wall. 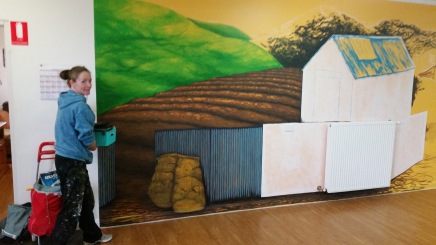