Last year, Liza McCosh, Director of Scope Galleries, generously invited me to exhibit my video work “Gaia is Symbiosis as Seen from Space”. I took this as an opportunity to develop some of the thinking contained in the video as well as to further develop my installation processes. Inside Out marked an important step forward in my thinking about my specific research as well as my broader understanding of how art produces knowledge. I came to realise the extent to which this video work is very much in conversation with the work of colonial landscape painter Eugene von Guerard and his observations which sought to understand the landscape as an interconnected ecosystem. I also came to realise the important role art plays in not only observing and critiquing our relationship to the world but also how crucial it is in proposing new and alternate ways to imagine this relationship. 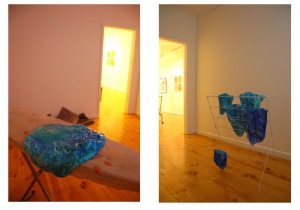 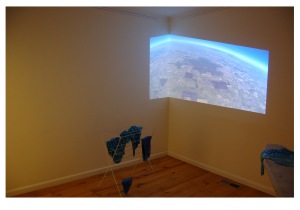 I was fortunate to share the gallery with an exhibition titled Embedded produced by Andrea Radley, Gareth Colliton and Karen Richards. Embedded was an acclaimed exhibition of works made during a residency in the Emergency Department at South West Health Care Warrnambool. You can read more about their work by following these links:

I reworked my footage from “Gaia is Symbiosis (…)”, slowly it down and playing it from end to start so as to let the viewer work backwards back to the ground. I also set this footage to a very simple soundtrack, a recording of my washing machine as it works through a wash cycle, occasionally thumping as it spins itself off balance. The spinning footage and the sound of the washing machine were a perfect complement and worked to draw together the sense of the ordinary domestic with the sense of the “bigger picture”. I made a series of sculptures that imitated water hung out on my clothes horse and my ironing board. As a happy coincidence the smell of the running data projector was almost identical to that of a hot iron. 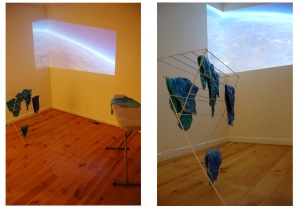 The following is the statement that accompanied Inside Out:

Through PhD research at the Australian National University Canberra I have been examining the overlap of body and environment as an “aesthetic subjectivity”. This way of understanding subjectivity emphasises how embodied consciousness is embedded in and emergent from its environment- an environment that we primarily experience aesthetically as the combination of sensation, emotion and meaning. A creative practice led inquiry into my domestic environment has centered this research. From this point I have attempted to make sense of and plot my relationship to the larger world in which I exist. I have used photography, drawing, sculpture, written reflection and sound and video recording in this continuous observation of my relationship to space.

Inside Out is a fragment of a larger body of practice that reinterprets my 2013 video work Gaia is Symbiosis as Seen from Space in order to imagine continuity between our ordinary domestic world and the larger social, ecological and cosmological realities we share.

Focusing on the aesthetic nature of our connection to the world has provided me with a way to imagine the materiality of our continuum with time and space. My aim now is to create spaces that convey this to others.

The video Gaia is Symbiosis as Seen from Space was originally created as part of “The Kitchen Table Art Expedition”, an Arts Victoria Artists In Schools Program held at Macarthur Primary School in 2013. 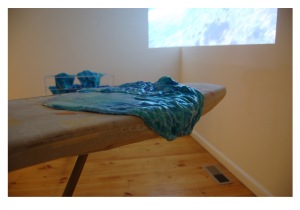 In late December 2013 I was able to make a research trip to Sydney. My aim was to see two spaces that I had viewed from a far for too long- Edge of Trees and Paddington Reservoir Gardens. I also took advantage of my temporary location by visiting a few other art sites.

I visited the amazing collection of contemporary Chinese art at White Rabbit Gallery in Central Sydney http://www.whiterabbitcollection.org/ , I was impressed by the way many of the works really grappled with the social, political and spiritual turbulence spurred by globalisation’s rapid pace. Gonkar Gyasto is the artist who has most stayed with me- his works deals with place and placelessness and identity.

After lunch I made the trek to Brett Whitley’s Studio in Surry Hills, http://www.artgallery.nsw.gov.au/brett-whiteley-studio/  where I spent time with epic self-portrait as a landscape, Alchemy. I had seen this work on an ABC Documentary http://www.abc.net.au/arts/artofaustralia/ and felt that Whiteley’s process of making an immense landscape as self-portrait and autobiographical narrative illustrated my notion of aesthetic subjectivity perfectly. I crawled over this painting for almost an hour. 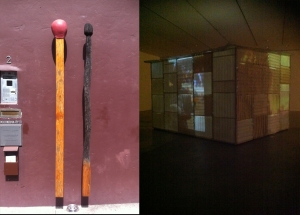 Walking back into Sydney Central I made my way to the Art Gallery of NSW. Here I was most keen to see the work Illuminate. The product of a community arts collaboration between paper makers and Euraba artists from Northern NSW. I found this work mesmerizing. A corrugated box hut made of paper and illuminated from the inside out by four video projectors which animate each of the four walls with documentary style footage- it became this glowing aesthetic object, what you imagine the intersection between memory and place, our memory and home may be.

On my second day I sought out Fiona Foley’s and Janet Laurence’s Edge of Trees and the Museum of Sydney Forecourt. I first saw this work on a documentary about Laurence on the ABC (God bless aunty) back in 2007 I think. At the time I was really impressed by her approached and just really “got it”. In this work trees originally felled from the area (that had taken seed pre-colonisation) were returned to the site as greyed, noble logs. Laurence and Foley have used a number of materials to convey and capture the memory of this site, Latin and indigenous names are inscribed on the poles and heard echoing through this relic site. This was one of those sites which visiting only enhanced my appreciation of it, I felt it as a really powerful memorial and as a place in which to come to terms with history. Sitting there on a Sunday morning with the noises of buses, cars and pedestrians I imagined what it would feel like in the quiet of 3am, in the dark would the speaker’s aboriginal voice echo in the urban still?

I took a punt and figured out how to use Sydney public transport just enough to get myself to Paddington. I bought myself a coffee, crossed the road and walked down the stairs into the Paddington Reservoir Gardens. A young lady sat taking flute lessons, a family picnicked on a section of grass. I looked around the space, beautiful- what I had expected, an eclectic intersection of ruins and landscape gardening that embodied that contemporary eco-aesthetic. But I was a little underwhelmed too, and that is not a bad thing, I really had to query why I was underwhelmed. My research has led me to look at our relationship to the environment and this has in turn revealed the many ways in which this relationship is constructed. This construction process is not always one in which we can exert our own agency however, it is not uncommon for the constructed spaces in which we find ourselves to be forces themselves in fact shaping our agency.

I had stayed in Western Sydney and caught the train to and from that infamous urban landscape. Making my way into the Sydney CBD that morning it was impossible to ignore the way money concentrates itself as witnessed in the buildings of the area, their commercial occupants and their proximity to the harbor, the memory of that Edge of Trees nestled into this Western, globalized space. Sitting here in Paddington it was hard to detach from the awareness that this beautiful, ethical space was entwined in the circumstances of privilege that keep its nearby property prices so high. Another dimension to my underwhelming was to do with the difference between a space made using aesthetics to create a more neutral common area and a space made using aesthetics as a language to engage its visitors and its socio-historical contexts in order to push into a questioning of that relationship between subject and world.

These are questions and currents that keep pushing through my research and will be developed as I go. In two fast approaching weeks I will take flight for overseas field research in America and Japan. Questioning the processes of aesthetically made spaces will be a core task of this research. Stay tuned… 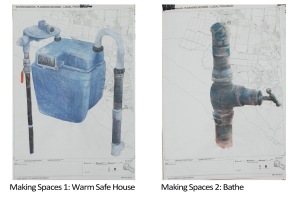 The drawing series “Making Spaces” notes the shift in my understanding that occurred through the domestic observations I undertook through my PhD Research in 2013. I had come to see how the interfolding of body and environment was dynamic, reactive and productive. It could never be a pure, pre-reflective engagement. Perception is always prewired in some way. Just as each photograph I took of my domestic life operated to construct a scene, each perceptual engagement with space operated to construct that space, making it into a particular space dependent on the intention and activity of the subject and the resources and conditions of the given space.

I saw these drawing works as indicating some of the processes that enable us to make the ordinary (almost invisible in their apparent un-remarkableness) spaces of our everyday worlds. I chose to draw on maps which were directly relevant to my ordinary life. The maps include the location of my children’s school, family daycare and my house. My previous year’s research into the operation of ecosystems, Warrnambool’s geology and indigenous understanding and connection to land combined with a deepened understanding of Colonisation’s material processes of naming, dividing, selling and “developing” land. This utterly changed the way I perceive the fixed, concreteness of urbanization, its infrastructure and the cultural practices it enables. I see these drawings as an interaction between the maps, the drawn image and the title. To me this is a way of grappling with the actual material reality of how it is that we shape land and resources in order to produce and maintain the homogeneity of contemporary urban life and the regular comforts this enables. 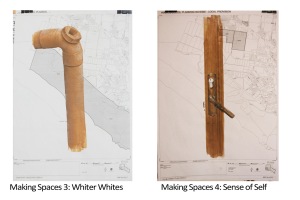 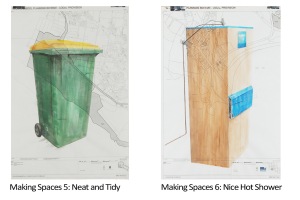